Well, we knew the Republican-dominated PA State govt. was going to stretch the bounds of sense and reason (hey, they’re Republicans, that’s what they do) in the 2010 redistricting, but this gerrymandering of the 7th District (of which Chadds Ford is part) is outrageous even coming from the likes of Dom Pileggi and Co. In a wonderful Christmas present for party-line incumbent Republican Pat Meehan, Democratic areas of the 7th, such as Upper Darby were excised and rural areas of Chester, Lancaster and Berks county were added. Delco Dems chair David Landau says of the new district, “It looks like an oil spill…we now have Amish farmers crammed in with the inner ring suburbs.” 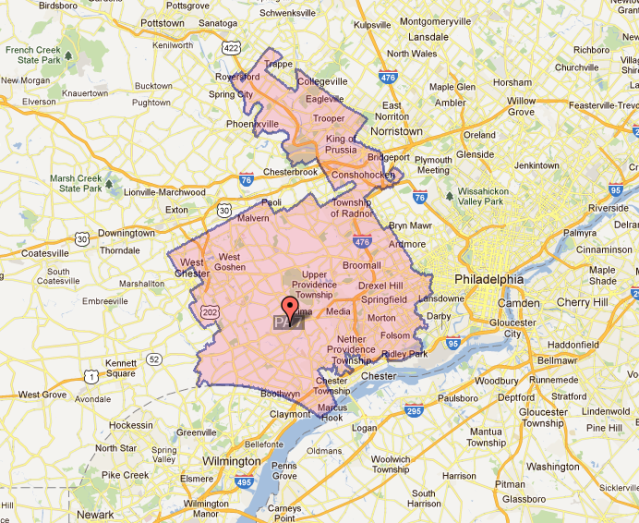 Here’s the new one, which has been labeled the 5th most gerrymandered district in the country. I’m hard pressed to imagine more outrageous ones, but I bet they’re all to benefit Republicans: 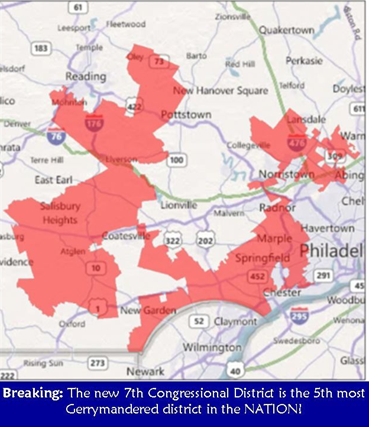 When I was 11, I loved horses, and often watched horse races on TV (beyond everyone’s obligatory viewing of the Kentucky Derby). It was always helpful when the broadcasters would provide commentary like “Sea Biscuit’s in 4th but moving up strong,” which would help make sense of the seething mass of identical brown horses. I suppose that’s what today’s journalists and political pundits think they’re doing when they provide their daily (or hourly) accounting of who’s ahead in the presidential primaries—along with endless theories of why. We’re treated to interminable discussions of candidates’ hairstyles, lapel buttons (flag or no flag? disease ribbon?), verbal missteps, and the fact that were seen shaking hands with someone whose neighbor once said he thought Muslims really weren’t so bad. And the sole context for these discussions is the horse race commentary “Michelle’s in 4th place in Iowa now, will this help her with left-handed voters who hate cats?”

But the thing is, the sole point of a horse race is to see who wins.  There is no larger meaning of any kind, whereas, in politics, the race exists only as a means to an end—selecting someone to guide the nation. (To be fair, there are certain similarities, to wit that the winners of both types of races get to make more money and mate with larger numbers of desirable females). So how about we spend a little more time thinking about the end than the means?

What do I mean? Well, I suggest that these on-screen “journalists” spend the months leading up to an election exploring in depth the consequences to the country of a candidate’s statements and positions rather than the consequences to the candidate. Wouldn’t you like someone smarter than you (or at least with more time to research the topic than you) to help figure out this kind of thing? This is such an alien idea, something so outside our everyday experience with TV “journalism”, that I’d better give an example. Here’s a random one: This morning, reading a typical horse race commentary, I noticed a writer mention in passing that Mitt Romney suggested we deport all 11 million “illegal aliens.” Ok, that’s certainly a concrete proposal (i.e., not “let’s keep America Number One,” or “I support our troops”), and is one that has been voiced in various forms by a number of Republican candidates. And immigration is certainly a very important issue. But to the pundits, the only importance to a candidate’s plan to remove 11 million workers from the country seems to be in how it might hurt his chances with Hispanic voters vs. help him with covertly racist voters in border states. What nonsense! I want someone with the time, money, and clout to access data and expert researchers (not partisan mouthpieces) to explore the consequences of this plan and explain them to me! What do I mean? Well, a number of questions come readily to mind:

It took me a good 3 minutes to think of these questions, and I’m sure in 3 minutes you could easily add more sensible ones. And that’s just on the one topic. One passing remark by a candidate. What if we did that for all the major policy positions of the different candidates and parties? Invade this country? Bomb that one? Raise taxes? Lower taxes? Regulate trading of derivatives? What are derivatives, anyway? Gee, that would be hard! It would take a long time! Well, it would take too long for a 2 minute horse race, but not for a 2 year political race. Why not use the 24/7 “news” cycle for something helpful rather than entertaining? Bring back investigative journalism that focuses on something other than sexual scandals! Maybe we wouldn’t always have to be so surprised by the consequences of our country’s actions if we thought about them a little bit beforehand.