One of the many good things about Christmas Day is that Fox News will now suspend its peculiar annual ritual ranting about the fictitious liberal “war on Christmas.”  Now, admittedly some liberals are a bit uncomfortable with the country’s fixation on the feasting and gifting part of Christmas when so many are hungry and in want, but liberal guilt pangs hardly rise to the level of a “war” even by today’s lax usage standards (“the war on tire underinflation”). Besides, feasting and gifting are at best peripheral to the “real meaning” of Christmas? Even a Fox anchor (at least one caught unawares) would have to admit that the ecumenical meaning of the Christmas holiday is a message of peace, love and brotherhood. Right? Sounds pretty liberal to me (practically a hippie manifesto). So who could be at war with that? Hmm…

Well, a NYT op ed today discussed the upcoming House and Senate compromise deal on the Farm Bill, part of which contains $8 billion in cuts to food stamp benefits to 850,000 of the nation’s poorest households. The “compromise” part means that the House Republicans compromised their Christmas wish for $40 billion in cuts down to only $8 billion. Gee, less food for the hungry. Now there’s a lump of coal in your Christmas stocking (oops, can’t even do that—Republicans don’t want to provide home heating aid either). Say, who else didn’t want to give out coal?

“Oh! but he was a tight-fisted hand at the grindstone, Scrooge! a squeezing, wrenching, grasping, scraping, clutching, covetous old sinner! Hard and sharp as flint, from which no steel had ever struck out generous fire… No wind that blew was bitterer than he, no falling snow was more intent upon its purpose, no pelting rain less open to entreaty.”
― Charles Dickens, A Christmas Carol

That’s right, Ebenezer Scrooge was at war with Christmas. Sound like anyone we know? Maybe, the Republicans? Fox News? Now of course they all just love the crèche in the city hall courtyard, the nativity scene re-enactments at the school pageant. But those displays seem to be the beginning and end of their devotion to the Christmas spirit. And here’s what Dickens’ Christmas spirit had to say about that:

“There are some upon this earth of yours,” returned the Spirit, “who lay claim to know us, and who do their deeds of passion, pride, ill-will, hatred, envy, bigotry, and selfishness in our name, who are as strange to us and all our kith and kin, as if they had never lived. Remember that, and charge their doings on themselves, not us.”

Yes, cutting food and health care for the poor, referring to them as “takers” who are simply a drag on society (“what, are there no workhouses?”) is the ultimate war on Christmas. When your concerns are only with the “haves” and “have-mores,” then you are at war with Christmas. The real Christians seem to think so. Pope Francis stated in his Christmas Eve message last night:

“If our heart is closed, if we are dominated by pride, deceit, self-seeking, then darkness falls within us and around us.”

Well, Scrooge ultimately changed. He reclaimed his sense of fellowship with humanity, he even bought food for the poor. Perhaps we could do the same. All of us.

Merry Christmas to all.

Went to a reception for Joe Sestak the other night. He’s not “running” for the Senate yet, but he’s “exploring” it seriously. And if you’ve ever watched the Discovery Channel, you know exploration costs money, what with all the sled dogs and dried seal meat—and that’s just to get to the North Pole, which is much cheaper and easier than getting to Washington, DC, even from here in Pennsylvania.

Now, I don’t begrudge Joe my contributions, because I’d like his explorations to succeed (and I’ve hosted several events for Joe to prove it) and it does take a lot of money. Joe has $ 1 Million at his disposal but Pat Toomey, the evil Grinch who recently took over the North Pole (because Santa Claus gave away too many food presents to unworthy hungry people) has $3 million. Neither Joe nor the Grinch (quite correctly) thinks he has enough. Why on earth does it take so much?

It’s certainly not sled dogs and seal meat (interns and pizza). Nope, it’s all needed for TV advertising. After all, how would we know who was an evil, Muslim, socialist minion of Hitler if his opponent didn’t tell us that on TV—over and over and over? However, much more important than scurrilous information is the positive feedback loop of the money/TV connection. The more money candidates raise, the more seriously they are taken by their national party (which won’t back anyone who can’t generate a whopping nest egg on their own), by the pundits, by their potential opponents (what eager-beaver Republican would want to challenge Toomey knowing he’s starting $3 Million or more in the hole?) and by potential donors (nobody wants to put money into a losing cause). Thus the positive feedback loop. Candidates who have money are the most likely to get money, which then enables them to get even more money.

This isn’t anything new, and I’ve already written about it (Voting with Dollars). But there’s another way money in politics has affected democracy that I haven’t mentioned. Money has so obviously become the key to political success (as opposed to, say, voting) that the huge number of eligible voters without the spare cash to funnel to people who represent their hopes and dreams have become convinced that the game is rigged against them—so why bother. Why bother volunteering, why bother talking politics with friends and neighbors, why bother…VOTING.

And they don’t. This is the real triumph, and evil, of money in politics. The top few percent have used huge media cash infusions to convince the lower 75% that they are powerless*, EVEN THOUGH IN A SINGLE ELECTION THEY COULD THROW THE BUMS OUT AND VOTE IN CANDIDATES WHO ACTUALLY REPRESENT THEM. This reminds me of the pictures you see of hundreds of prisoners of war being escorted by a mere handful of armed guards. The prisoners could overwhelm their captors at any minute—but they’ve been convinced that they are powerless…and so they are. 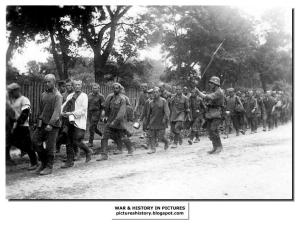 Prisoners on the Eastern Front, WWII.

Let’s modify the old slogan: “Workers of the world VOTE, you have nothing to lose but your chains.” Don’t let a relatively few wealthy guardians of privilege and the status quo continue to flood themselves and their cronies with contracts, tax breaks and deregulation, things that are against the interests of almost everyone who lives here (and on the earth) yet continue to be done because the beneficiaries have convinced us that we can’t stop them. Well we can, if we only will.

*Turnouts are typically < 50% for off-year Congressional elections, and often in single digits for state and local primaries—where the $$-driven decisions are baked in (FairVote.org)

Nick Kristoff wrote an Op-Ed piece in the NYT for Thanksgiving (“Where is the Love?”) that focused on “…a conversation about empathy for fellow humans in distress,” pointed out the apparent lack thereof, and followed with the rabidly liberal observation that “…success in life is a reflection not only of enterprise and willpower, but also of random chance and early upbringing.” He then closed with the (socialist? communist? Christian?) remark that “…compassion isn’t a sign of weakness, but a mark of civilization.”

His musings struck me as reasonable and rather mild—appropriate observations on a day in which we give thanks for the good things that have come the way of some, but as per Mr Kristoff, not enough of us.

However, Mr. Kristoff’s editorializing that some in our society seem to have a slight deficiency in their sense of charity and empathy aroused a storm of indignation from the right, who countered with these devastating Thanksgiving Day rebuttals:

LD from Tulsa: “We need to let the poor know they have to start taking responsibility for their own actions.”

Gmason from Left Coast: “The problem is that the so-called compassion of the left has done more to harm the nation’s poor than to help them. All of your policies kill job creation and the opportunity to lift yourself out of the poverty. You undermine the moral fabric of our nation…”

Malucks from Malvern: “Depriving people of the dignity that personal achievement bestows is far more insidious than spreading around other people’s wealth.”

Al from USA: “Far to many are lazy and resentful of the success that hard work brings.”

Gene from Atlanta GA: “It is certainly true that born poor is a disadvantage…However, the majority feel like they are entitled to government health care, housing, food, etc.”

Jeff, from Goffstown, NH: “We see people who could work but chose to remain “on the dole” and who think nothing about it…I’m tired of supporting those that think they are owed a living just for being born.”

Smack! Bam! Take that, you liberal lefty you for daring to say we lack empathy and compassion! We have plenty of empathy—for ourselves! And we’re very compassionate for those who pay taxes! Other commenters felt moved to add their preferred alternative to providing food and shelter to those in need:

Walker in Bar Harbor: “Perhaps poor people should not have kids…”

De Ruiter, from South Central PA: “I am tired of paying for other people’s mistakes. Our government is using my hard earned tax dollars to pay unfit women to churn out large numbers of illegitimate, doomed to poverty children by a series of stray men who breed for a night or two and them move on to impregnate the next welfare woman.”

John Taylor from Millbrook NY: “If your income is below a certain level then you cannot have children. Additionally, if you are collecting any form of government subsidy then from the moment you start collecting you cannot have anymore children. Yes, this is crude and of course would have to be refined a bit…”

George Gharda-Ward MD, from Jacksonville FL: “How about forced sterilization. Let’s say that if a woman doesn’t have a household income of at least $40,000 by age 25 we just operate on them?”

Ah yes, the party that doesn’t like poor people, doesn’t want to have as many poor people, and explicitly states it doesn’t want them to breed, continues to fight with tooth and claw—to deny them birth control. At least they didn’t go so far as to advocate the solution to the problem of poor children that Jonathan Swift put forth in A Modest Proposal. Hope Michelle Bachmann never reads that.