I bet you don’t all agree on how amusing Gallagher is, with his giant, whacking sledgehammer and immobile, squishy vegetable/fruit targets. 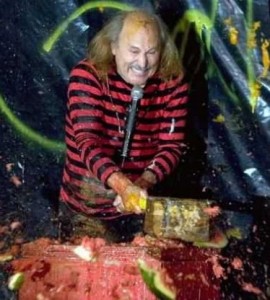 But between the hammer and the watermelon, I bet you agree on which one’s the Republican and which one’s the Democrat. Right? The Republican hammer has been pounding away at the Democratic Affordable Care Act watermelon for the last 6 mos until finally this week, Kathleen Sebelius popped out. Meanwhilst, Democrats—in and out of the White House—have just been sitting in the front row, silently draped in their plastic sheets, somewhat offended by the waste of good food yet strangely attracted to the spectacle.

So what. Sebelius IS a watermelon, right? Botched that website rollout! Give her a whack for me!

Well, any of you ever been involved in a really big, innovative, IT project? And no, I don’t mean changing your FB profile photo or starting a blog. I mean something large that’s never been done before and requiring multiple vendors and multiple years. I didn’t think so. Well I have (certainly not on the scale of the ACA, but still in the multi-million range). So let me remind you the IMPORTANT things that happened with this rollout. The project LAUNCHED ON ITS GO-LIVE DATE in October. And it MET ITS FIRST MAJOR TARGET (7 million registrants by 3/31/14). These are the metrics that matter, not whether there were bugs along the way. Meeting a launch date set over a year in advance and a pre-specified metric in a project this complex is a big deal. And if you think you can do innovative tech (ie, building something that didn’t exist rather than just duplicating current functionality) and NOT have bugs, problems and glitches, well then you don’t know what you’re talking about or have an axe to grind. That is, you’re a Republican.

So why do we insist on being watermelons? Why do we just lie there, taking whack after whack from the Republican hammers being wielded by grinning loons? We reformed health coverage in this country! We made it impossible for insurance companies to deny medical coverage to people who (gasp) actually NEED medical coverage! We made it impossible for them to throw you out once you got sick! We arranged for subsidies to help people who cannot afford the full cost of coverage and expanded access to Medicaid! These are good things. These are great things. What did the Republicans do? Well, they split their seams and shouted themselves hoarse trying to block all this and deny people health care. And most Republican governors are still blocking access by refusing to participate in the Medicaid expansion, which ALONE will cause thousands of otherwise preventable deaths each year (see Paul Krugman in NYT, and the original research article in Health Affairs Blog).

From now on, every time you hear some dunderhead fuming about the “botched” ACA, pull out the hammer:

Capitol Hill is full of fat frogs croaking “Benghazi, Benghazi” who need a good whack and I want to see people in the administration haul off and take a swing for once.